Wheel of Wishes is a new online pokie created by Alchemy Gaming and powered by Microgaming. Some New Zealand online casinos have already added the game to their selection, and there's surely more to come soon.

Here are our top bonus offers for Wheel of Wishes Slot Machine. As always, we keep our bonus and free spins lists up-to-date. We do this by checking the biggest NZ online casinos on a regular basis. So whichever bonus you go for, it's active right now.

The pokie’s developer is Alchemy Gaming and powered by Microgaming, Wheel of Wishes is a brand new progressive pokie that is already starting to rival the world’s biggest and best jackpots, and it just was published in January 2020. The game features 4 progressive jackpot rounds with values ranging from 10 to 2 million. That’s right…. 2 million.

The graphics are colourful and crisp, the gameplay is simple yet interactive, and the potential to win big is certainly there. Here, the pokie provider relies on a simple setup, of 5×3 reels and 10 pay lines. Also, an Arabic-style theme that does involve the magic lamp and treasure chests.

Here’s what we’re loving about the newest member of the progressive jackpot pokies category:

We’re not surprised if you haven’t heard much about Wheel of Wishes. It was officially released by Alchemy Gaming on January 7th, 2020, but won’t be released to other gaming providers until February 11th. So mark your calendars, but more importantly, keep reading to learn the ropes of Wheel of Wishes and up your chances of winning big.

Here are some basic facts on the new slot machine. Wheel of Wishes is a new and exciting progressive jackpot video pokie game that went live January 2020.

Spin Casino offers 100 Free Spins on Wheel of Wishes Pokie as a part of the welcome bonus.

Wheel of Wishes is a 5×3 reels pokie that has 10 pay lines. The only way to win is if you land on 3, 4, or 5 matching value symbols on middle reels (from left to right only). The game’s 93.34% RTP during the base game and that’s quite low compared to other pokies, even with medium volatility. The exciting part of the game is the possibility to hit a massive jackpot.

You can put down 0.10 to 25 credits per spin, and similar to Mega Moolah, this game has 4 progressive jackpots rounds. But the similarities stop there.

Unlike other progressive jackpot games like Moolah, which has a final jackpot value that starts at 1 million, the Wheel of Wishes progressive jackpot prizes – or WOWpot – starts at 2 million. Not only is the WOWpot starting seed twice as much as Moolah’s Mega jackpot bonus game, but the Major jackpot is 5x the size of Moolah’s Major round. Instead of a Major jackpot starting at 10,000, the WoW Major has a starting value of 50,000.

There’s really no debate on which is better in terms of winning potential when comparing the two games side by side. We love Moolah, but we won’t argue with the numbers. If you win the WOWpot placing the minimum bet, you’ll still be walking away with $2 million in winnings.

Aside from the $2 million jackpot prize WOWpot, the thing we love most about Wheel of Wishes is the extra spins that come alongside the main WoW game. In this case, free games equals free spins. Microgaming has already made it clear that they’re allowing casinos to offer bonus spins during WoW gameplay.

This is something we haven’t seen from Microgaming in the past. Playing other popular progressive jackpots from this software provider, like Major Millions and King Cash-a-Lot, doesn’t come with the same free-spinning luxury.

One of the biggest turnoffs of Mega Moolah is that the game can’t be played for free, not even in demo mode just to check it out. But this isn’t the case for Wheel of Wishes; you can see the pokie in action before placing real-money bets.

If you’re the type of player who prefers to take a game for a test run first, this is a big deal. Just keep in mind that it’s not possible to land on real-money progressive jackpot prizes when playing in Demo mode – you’ll need to use free spins, and real-money bets for real money wins. But playing the Demo version is still a perfect way to get familiar with the base game and game mechanics.

The theme behind Wheel of Wishes is Arabian decadence, transporting players to a world of opulence and wealth. It’s all about the potential to be granted the wish of good fortune from the magical genie, a notion of the genie and the magic lamp from the Arabian Nights stories – and with a wheel of fortune you could take down the WOWpot jackpot.

Wheel of Wishes symbols has varying values from card suits to special scatter and wild symbols, treasure chests, magic lamps, ranging from low to high. The high-value value symbols all relate back to the Arabian theme – like mystical books, treasure chests, potion vials, and magic lamps. The low-value icons are represented by the traditional card suits and a (somewhat random) pink circle.

Three or more matching card suits across the 10 pay lines lead to a payout. The premium value symbols – including a purple amulet, blue potion, a green and gold book, and a treasure chest – are what you want to see. These lead to a higher payout, but not as high as landing on a genie lamp winnings across the reels for a 10x payout. When you see magic lamps in the 5×3 reels, you have the potential for high winnings. 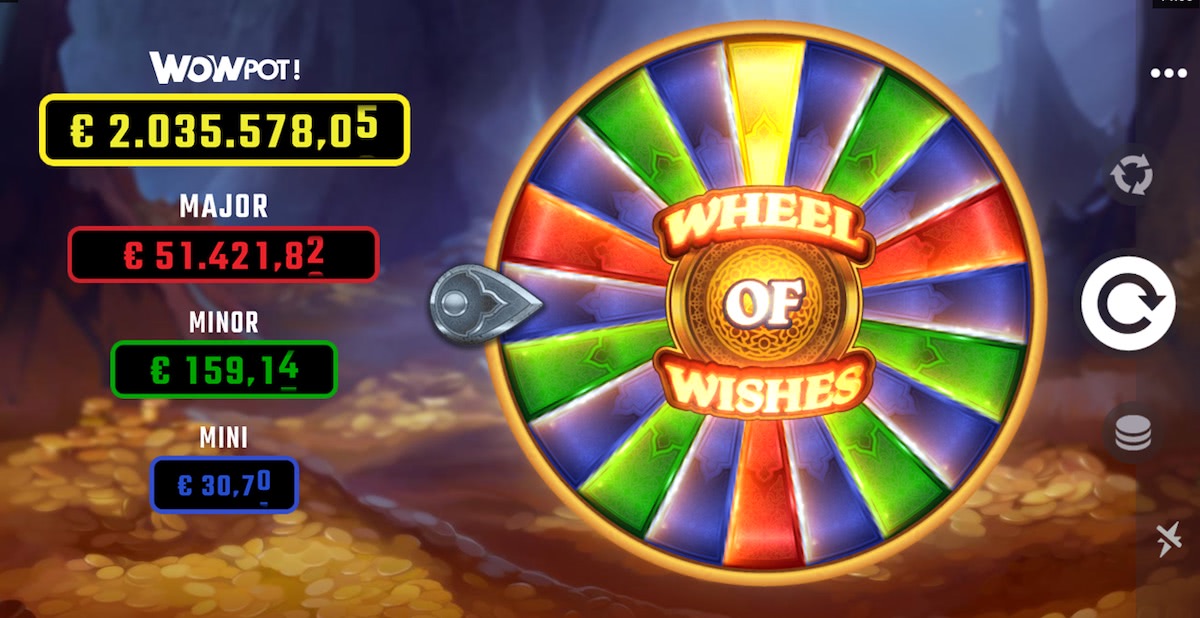 Wheel of Wishes is a progressive jackpot pokie. Similar to legendary Mega Moolah pokie, it has four different jackpots – if you hit the big one, you’ll become an instant millionaire!

Wilds, Scatters, & Power Spins
The word Wild acts as the Wild symbol, which is easy to remember. When you land on one of these, substitute any symbol in place of the Wild symbol (other than the Scatter). The scatter symbol is represented by the Wheel of Wishes icon. When you land on two or more scatters anywhere in the middle reels, the game’s Power Spin Mode is activated.

About the Wheel of Wishes Power Mode

The massive jackpots stirred the initial excitement surrounding Wheel of Wishes, but the Power Mode feature has kept that excitement going strong. Once Power Mode is activated, game mechanics change your bet size increases by 10x – so if you placed a base bet of 1, that would transform into 10 credited bets! During Power Spins, giant 3×3 symbols take over the middle 3 reels.

As is almost always the case with jackpot pokies, the chance of triggering the jackpot bonus increases as the betting stake increases. Even though low rollers might not love the increased stake in Power Spins Mode, it actually does you a huge favor by upping your chances of triggering the bonus spins game.

If you prefer the increased 10x stake for the chance to trigger the jackpot round, you have the option to play in 3×3 bonus wheel symbols Power Mode all the time. Just click the “Power Mode” button to the left of the reels. The best part of playing in this mode is that it allows players to activate a Power Spins side bet.

In this bonus feature, every spin uses giant mega value symbols and offers the chance of entering the jackpot bonus game. The 3 center reels are combined for one spin, and it contains giant premiums and a bonus wheel symbol. The best outcome is to trigger the jackpot Wheel of Wishes bonus symbol, which is where the real magic happens.

Wheel of Wishes Jackpot Round

When you enter the bonus game, you’re guaranteed to win one of the 4 jackpots. In most cases, this means winning the Mini jackpot, which has a starting value of 10x the stake. Once in the jackpot round, you’ll be led to a separate screen where you’ll see the 4 jackpot values listed on the left-hand side.

This is a Wheel of Fortune jackpot bonus game. The wheel is broken down into coloured segments, and each colour represents one of 4 jackpots games:

The bonus wheel symbols consist of 20 segments – 10 blue, 6 green, 3 red, and 1 yellow. Four progressive jackpots featuring seed values between 10 and 2,000,000 credits (max payout), and according to the wheel layout, you should have a 50% chance of winning the mini, 30% chance of landing on the minor, 15% chance of major, and 5% WOWpot. But the final decision is made by the Random Numbers Generator.

Like all progressive jackpot games, a fixed percentage of all bets placed on Wheel of Wishes contributes to each jackpot. The more bets placed, the higher the jackpot bonus game values will rise. Once there’s a winner, the jackpot that was won is reset to the starting value.

Playing Wheel of Wishes on Mobile

Yes, you can play Wheel of Wishes on a mobile device – it’s even possible to win the progressive jackpot, WOWpot on a smartphone. Microgaming has always placed a major focus on creating games that can easily be played on the go, and Wheel of Wishes is no exception.

Just be sure to choose a mobile casino that is compatible with your mobile device’s operating system.

What’s the Verdict on Wheel of Wishes?

Wheel of Wishes pokie by Alchemy Gaming offers modern graphics and a massive progressive jackpot. But to be completely honest, not everyone loves Wheel of Wishes, but this mainly applies to the low-rollers who aren’t willing to put down 10x the base bet for access to the bonus round. But in our opinion, you have to be willing to make sacrifices if you’re hoping to walk away with $2 million. To win big, you need to play big!

So if you can’t get behind the 10x base bet for better odds at entering the bonus round, you might want to stick with your old pal Mega Moolah or other progressive jackpot pokies. But if you’re looking for the opportunity to win a life-changing amount of money, this 5×3 reels Microgaming progressive jackpot network slot is worth trying your luck on.

A lot of players are skeptical of games with extremely high payouts, assuming that the casino powerhouses are rigging them to prevent too many winners. But this isn’t the case at all. Like all other pokies, Wheels of Wishes uses a Random Number Generator (RNG) to keep things fair.

What is the best Wheel of Wishes Casino?

Right now, the best casino to play Wheel of Wishes slot is Spin Casino. Get up to 100 Free Spins and a massive first deposit bonus when you sign up through our link.

What’s a good strategy for winning big on Wheel of Wishes?

There's no right or wrong way to play, and honestly, luck is a major part of winning since numbers are generated at random. However, the best way to up the odds of winning is to bet high. Bets with a greater stake are more likely to make it to the bonus round, and entering the bonus round is the only way to win a jackpot.

What is the Wish Factory?

Wish Factory by Webkinz has nothing to do with the Wheel of Wishes Slot Machine by Alchemy Gaming.

Fintan Costello is a gambling industry veteran and has held senior leadership positions in numerous gambling companies including PokerStars and PaddyPower. For a number of years Fintan also led the Gambling vertical at Google.

Fintan uses his industry experience as a gambling insider to oversee BonusFinder and make sure that everything is to the highest possible standards. His mission is to make sure that our visitors can “Play with More”.

Fintan is also Co-Host on The Gambling Files Podcast where he interviews leading experts in the gambling industry.

Fintan is super proud that the team has been recognised with the following award nominations:

Get
$10
bonus
Get this bonus now Only takes a minute